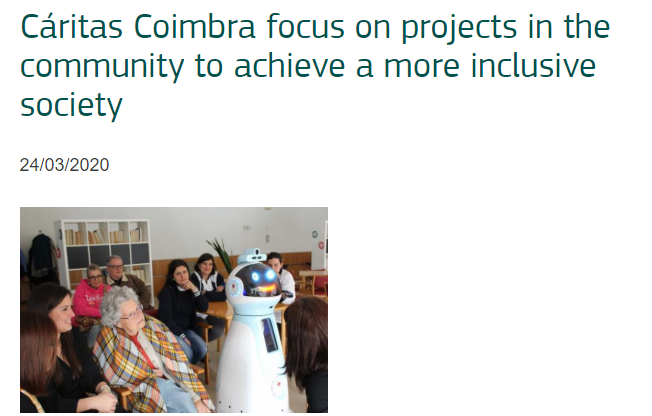 24 Mar Cáritas Coimbra focus on projects in the community to achieve a more inclusive society (EIP on AHA, EN)

Posted at 14:19h in Press Mentions by PHARAON
Share

Population ageing is a reality observed in all countries of the European Union (EU), constituting itself as a demographic phenomenon – but also a social, economic, cultural and health one – that imposes new challenges. According to Eurostat, in 2018, nearly one fifth of the EU population was aged 65 or more. Within the last decade, an increase of 2.6% was observed, being expected that people aged 65 or over will represent 31.3% of the EU population by 2100.

This trend brings the need to find new answers. Society must be organized to take advantage and include older people, improving their quality of life and alleviating the social isolation in which they live. Realizing this, Cáritas Coimbra, together with other organisations, has been investing in projects that involve the whole community in the ageing process. In the last few months, it has started several projects that involve not only direct/primary beneficiaries – older people – but also their formal and informal caregivers and other stakeholders such as healthcare providers, public authorities, insurance companies, researchers, citizens and civil society organizations, among others.

An example is PHArA-ON, a large-scale pilot, developed by 42 European partners, which aims to create a set of open and integrated platforms where older citizens, formal caregivers (health and social professionals), informal caregivers (family and close friends) and other community organizations can interact providing better physical, mental and well-being