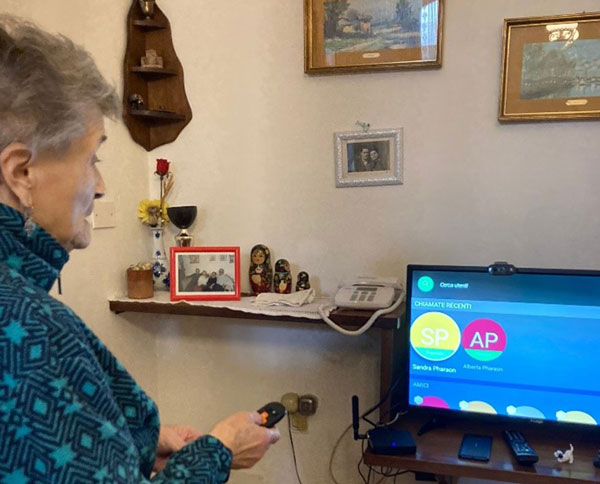 The deployment in the Tuscan pilot site started in March 2022 and is currently proceeding according to the scheduled timetable. The first group of users (10 older adults, 10 informal caregivers and 5 formal caregivers) is involved in the socialization scenario, using the the SentabTV Box. According to the evaluation protocol, an equal number of users has been enrolled as control group.

The enrollment of the second group, which is dedicated to the Monitoring scenario, is now also ongoing. They are going to use the Fitbit wristband, motion sensors, humidity and temperature sensors, and the Discovery platform, in order to visualize the collected data. 4 older adults, 4 informal caregivers and 2 formal caregivers have been recruited so far, as well as an equal number for the control’s group.

To recruit older adults, the representatives of the public social services of the different regional areas covered by Umana Persone’s cooperatives have primarily been involved, but also families and relatives of cooperative’s workers were allowed to participate. To get and ensure the engagement of users is a very difficult and delicate task. Umana Persone’s facilitators pay a lot of attention to this, scheduling many home visits and individual interviews, in order to obtain the trust of older people and their families.

The training about the use of technologies is conducted using the training materials created and shared within the Italian pilot, but great importance is given to the on the job training using the cascade training method. This means that Umana Persone’s team trains the group of facilitators coming from cooperatives, who train the users in turn. The facilitators represent the bridge between the project governance and the project management and maintain their important role during the whole project, collecting malfunctions notifications as well as every other relevant feedback from users.